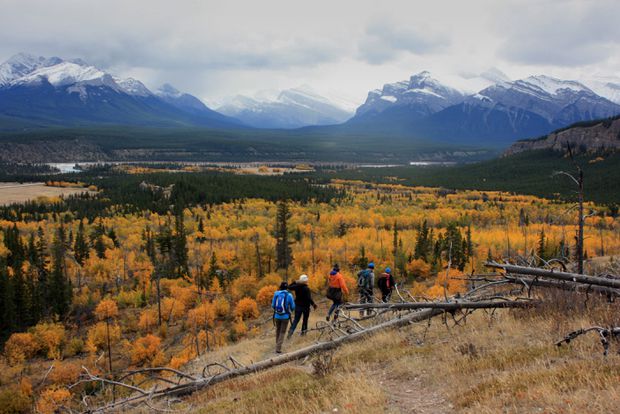 Two O'Clock Ridge near Cline, Alta., is shown in this undated handout photo.

The Alberta government has proposed eight new parks covering 4,000 square kilometres along the front ranges of the Rocky Mountains.

Premier Rachel Notley, saying Alberta’s parks must expand to keep up with a growing province, compares the move with former premier Peter Lougheed’s creation of Kananaskis Country west of Calgary.

“Today, just like in the 1970s, Alberta is seeing new pressure on its parks,”

Bighorn Country lies in west-central Alberta along the eastern edges of Banff and Jasper national parks. It features mountains, foothills, forests, lakes, streams and the headwaters of the North Saskatchewan River that more than a million Albertans depend on for drinking water.

The area has been under consideration for protection since the 1980s and its core remains relatively free of energy, forestry and farming activity. The region is home to vulnerable species from grizzly bears to bull trout to harlequin ducks.

The plan calls for parks and land-use areas with a variety of permitted activities. Off-highway vehicles, horse packing and hunting would be allowed to continue, said Environment Minister Shannon Phillips.

Grazing leases would also continue, she said. No existing trails would be closed.

The plan comes with $40-million over five years to build and improve infrastructure. That would include bathroom facilities, better bridges, new parking spaces at trailheads, improvements to 240 campsites and the addition of 150 more.

“We have heard many, many concerns from many folks about the need for better management. We’ve heard of user damage to the land, user conflicts, lack of protection of wildlife and a lack of investment.”

The plan also contains provisions for Indigenous co-management of the area, parts of which are heavily used for traditional ceremonies and other purposes.

Ms. Notley said adding a little infrastructure to the area’s great natural beauty could make it an important hub for tourism.

Back to dealing with reality-sure-it sounds good to protect wildlife and parklands-but what Notley isn't admitting is that she wishes to leave a legacy this coming election and it would cut jobs devastatingly in the oil and gas and also the forestry industry . The Albertan Mills still have FMA Timber rites and is an area where the majority comes from-then there are the Oil and Gas companies that would need to take out their facilities.Alberta stands to lose a lot of Industry and revenue.Alberta has already Parks for protection.