We come at last to the final piece in our series on the future of energy.

Three weeks ago, we began, and reviewing from the future to the past, narrowed down seven energy sources that could power the world and yield profits for savvy investors along the way.

We talked about fusion, solar, bioenergy, wind and wave and natural gas. And yesterday, we talked about oil, which is making a comeback.

But our final piece, as I hinted at before, is about one of the oldest energy sources humans have used, with the first known technology going back past the time of ancient Rome and Greece and the Qin Dynasty. Whether used in caves, hot springs or in today’s high-tech facilities, humans could always rely upon…

It’s no coincidence that the best exemplar of a place in the world that uses geothermal energy is also the world’s largest green energy and electricity producer per capita: 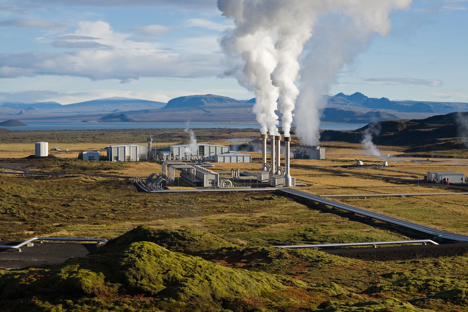 Yes, beneath its breathtaking landscape of freezing glaciers, lava rises to the earth’s surface from where two giant tectonic plates meet… and drift apart at a speed of 2 centimeters per year.

No wonder they’re so nice over there. Ever since  as legend has it  Vikings tricked outsiders into thinking Iceland had no lush, green resources… and Greenland had no ice… they’ve done remarkably well.

For centuries, Iceland’s hot springs have been used for bathing and washing. Then, one day in 1907, a farmer ran a concrete pipe from one of those hot springs and led steam into his house. Like the best ideas, it started small and caught on and in 1930, the first pipeline in Iceland was used to heat two schools, 60 homes and a main hospital.

Today, more than 80% of Iceland’s buildings are heated by geothermal.

We can’t forget to mention their hydroelectric power plants either. Iceland’s hydropower feeds off glacial rivers and waterfalls. In 1921, the country’s first of its kind produced just 1 MW of power, singlehandedly quadrupling the country’s overall electricity.

About 85% of Iceland’s primary energy comes from domestic renewable energy sources, with 75% coming from hydropower and 25% from geothermal. And according to a 2002 study, they have an abundance of energy leftover to tap. 83% more in potential hydropower. and over 200 volcanoes and 600 hot springs to heat your house or even your swimming pool.

The move from oil-based heating to geothermal heating saved Iceland an estimated total of $8.2 billion from 1970-2000 and lowered the release of carbon dioxide emissions by 37%.

Given all the data, and the sentiment of the people, it’s likely that Iceland will be completely free of fossil fuels within the next decade.

It should be noted, however, that geothermal is not without its hazards. It generates water, hydrogen sulfide, CO2 and hydrogen. At the power plants, they separate the gas from the water, and gas emissions make it into the atmosphere. As you may know, hydrogen sulfide is corrosive. But already, Iceland’s power plants are using biology to rethink this energy problem. Specifically, plants are experimenting with a bacterium that eats hydrogen sulfide.

Since geothermal is much more efficient than technologies that draw from variable energy sources, such as solar or wind in a true bottom-up fashion, they use geothermal to power greenhouse LED lights when it’s cloudy. All in all, Iceland’s unique geography makes it one of the best places to drill holes and harness this energy. That, and the people have a bigger say over how their government works.

In the wake of the aftermath of the 2008 financial crisis, the people of Iceland forced their government and banks to resign. Peacefully.

You know the story  it was the same one told over and over again around the world. Over-leveraging backlashed, currency was devalued, “experts” called for bailouts, and the stock market tanked.

But Iceland, with its 300,000 some population, was small and efficient enough to make a true correction to their economy and government. And while they were the pariah for years since, in 2013, Fitch upgraded their bond status back up to investment grade. Their future looks optimistic.

Unlike the U.S., whose officials were praised for bailouts, and whose CEOs were rewarded with unprecedented bonuses

Iceland rose up and forced the resignation of both the prime minister and effective government. New elections were held. New means were employed of choosing their leaders. The people took to the streets in 2010, for example, and had high level bankers and executives arrested. Interpol dictated an order to force all implicated parties to leave the country. They wrote a new constitution that has built-in mechanisms to avoid entrapments of debt-based currency and foreign loans.

Though I wish I had more time to tell you the whole story, the point is: it’s all too often the mainstream media push fear, murder, anger, government heroism, health fallacies and false information onto the public. But you rarely hear these stories… unless you’re wired into the alternative press. After all, people might get ideas.

The takeaway: invest in geothermal. And if you don’t want to invest in tech, but rather, a country that will own the future, invest in Iceland.

Ed. Note: The turnaround for Iceland since the 2008 crisis is truly remarkable. If only the leaders in the U.S. had as much intestinal fortitude and good sense. Oh well At least Iceland is setting a good example, even if no one chooses to follow it. And that clearly holds true for both their financial outlook and their attitude toward energy production.opportunities.
at May 02, 2019